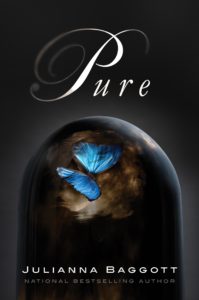 In addition to her novels for adults, Baggott has published seven novels for younger readers, aged 8 to 13 and for teens, including award-winners and critics’ favorites, under her own name and pen names N.E. Bode and J.Q. Coyle — a joint pen name with novelist, Quinn Dalton.

For teachers and parents of young readers, we’ve created a free 5-Part Guide to Stir the Imagination. It’s designed for The Anybodies Trilogy, but the exercises are created to boost reading and writing and aren’t limited to the series.

The Pure Trilogy is a cross-over title popular with teens, winning the ALA Alex Award, but it was technically published as an adult novel so you can find it here.

The first installment of The Anybodies Trilogy which follows the adventures of a young girl in the tradition of magical realism.

A People Magazine Pick for ‘What’s Cool This Summer,’ a top-five pick, alongside Bill Clinton and David Sedaris

“…a loveable, fun read for children – and for those who never really grew up … whimsical, unique …”  — Boston Herald

The second installment of The Anybodies Trilogy.

“…will have readers clamoring for another sequel.” – Booklist

“Heady stuff for kids, but effective…Baggott, as N.E. Bode, brings this intricate message to young readers in a style reminiscent of Roald Dahl, by way of P.L. Travers. There’s a snappy buoyancy to her prose, which is offset (but never overrun) by an eerie, dramatic undertone.” – Popmatters.com

“Hold onto your hats. N.E. Bode is back with another blockbuster … another magical, wild adventure.” – Greenbay Press-Gazette


The final installment of The Anybodies Trilogy.

One of the Top Four Magical Reads, Instructor Magazine

“As ever, readers will have to stay alert to pick up the plethora of literary references … All of this on the way to demonstrating that nobility of spirit and right beliefs will ever win out over selfishness … the series remains a delight for better-read audiences.” – Kirkus Reviews

The Prince of Fenway Park, HarperCollins

There was a curse on the Boston Red Sox; it was reversed, and this is the boy who did it – a novel for younger readers and Red Sox fans of all ages.

“Richly imagined … young sports fans will revel in Baggott’s underworld … especially young residents of Red Sox Nation, [who] will dig their cleats in for a thoroughly involving tale.” – Kirkus Reviews

“… brilliant premise … Both whimsical and provocative, this story will engage readers who like clever tales, and also those who enjoy chewing over controversial themes.” – School Library Journal (John Peters, New York Public Library)

“If you have a young reader … [The Prince of Fenway Park] should score a home run…. a wild adventure…” – Cape Cod Times

The Ever Breath, Delacorte Press/Random House

A novel based on a Muriel Rukeyser quote, “The world is made of stories, not atoms.” The narrative relies heavily on lost words from the English language and an invented landscape.

“Fantasy aficionados will gobble up this fast-paced tale … Baggott’s brisk prose propels readers through a tale that feels like a stepping-stone between Spiderwick and Harry Potter.” – Kirkus Reviews

A novel for younger readers about a boy being raised in a nunnery who falls into an Imagined Other World.

“…inventive and a whole lot of fun…” – Kirkus Reviews

The Amazing Compendium of Edward Magorium, as N.E. Bode, Scholastic

The Infinity of You & Me, J.Q. Coyle, the joint pen name of Julianna Baggott and Quinn Dalton, St. Martin’s Press 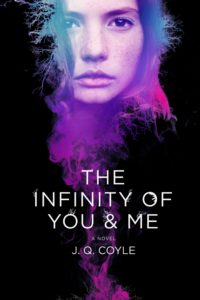 e parallel universes of her own making.

“This ambitious sci-fi novel, filled with multiverses and what-ifs, has a slow and complicated buildup but contains complex world building that would appeal to fans of TV’s Orphan Black.” — Booklist

“A fantastically fun mind-bender from start to finish, The Infinity of You & Me will thrill its readers and leave them hungry for more!” – Karen Akins, author of Loop and Twist