MENTAL DIPLOPIA – a story optioned with an NDA.

A strange new virus is spreading – its victims are reliving happy moments from their pasts, straddling two worlds, then and now. Even though the disease is fatal, some people go willingly without a fight. We follow an epidemiologist, trying desperately to find a cure, while falling in love.

GASLIGHTER’S LAMENT – a story at Conjunctions is with Assemble Media.

In a future where all of our emotional dirty work is done for us by AIs (who work in a remote factory and can slip into human forms), one AI is working as a gaslighter – helping a man gaslight his girlfriend. But is the girlfriend who she says she is? Think HER but if HER were more clearly the AI’s story and had a much bigger plot.

WHICH BRINGS ME TO YOU – a novel co-written with Steve Almond, with BCDF.

THE HOLOGRAPHER  a story in Conjunctions.

During a future lockdown, people lose important memories of years past. When the lockdown is lifted, their memories return — but to different people. We follow a family haunted and upended by a dark secret.

THE VIRTUAL SWALLOWS OF HOG ISLAND, a story published at Tor.com.

In the not too distant future, people won’t talk to a therapist while sitting on a couch in an office. We’ll all be in virtual reality gaming rooms, designed to help us deal with our issues. It works as the natural evolution from THE BOB NEWHART SHOW to FRASIER to now. Maybe a little THE GOOD PLACE but set in our world. 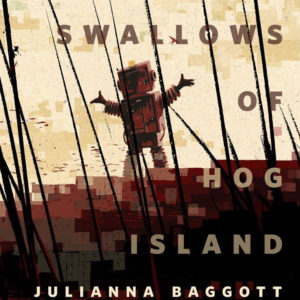 THE RECITAL, a story inspired by Shirley Jackson, published in Monkey Bicycle.

All sixteen-year-old girls have to participate in The Recital – a contest that doesn’t have a winner, but does, in fact, have a loser. As we watch them get ready backstage with their mothers, the stakes are incredibly high.

THE POSTICTAL STATE OF DIVINE LOVE, a story in Lightspeed.

After her mother has a seizure, a woman has to deal with the alternate reality that her mother clings to: that they are part of the matriarchal line of vampires, dating back to Queen Elizabeth. The story only nods at the massive world building backing it up, rewriting history and science with vampires while creating a whole new mythology.

The American Empire has fallen. The Gulf Coast, now called The Plastic Coast, is choked with garbage.

In BANDING, a team of scientists has let loose a kind of plastic-eating bacteria. A woman, who’s running from a disastrous marriage, is banding the creatures in order to track them and finds that the bacteria have morphed into something very, very different. [Only available in print. Email to request.]

In PLASTICS, a teenager, who survives by picking from the garbage that has glutted the Gulf Coast, loses her mother in a hurricane and must navigate the wrecked and polluted world to find. [Preview it here. Email to request.]

THE KEY TO COMPOSING HUMAN SKIN, a story in Fantasy & Science Fiction Magazine. [Only available in print. Email to request.]

A boy’s rash is used by his mother and a fellow scientist to create a virus that makes people’s skin light up and project the worst moments of their lives – their sinful pasts – in an attempt to right the wrongs of a lying government, they try to combat lies with the truth.

THE VELVETEEN LOVER, a story in Agni and based on “The Velveteen Rabbit,” which is in the public domain.

An AI sex-toy (not a stuffed toy rabbit), cast aside by the rich woman who once loved him, must now seek out his own autonomy. This is very A24. [Preview here. Email to request.]

The story of a young AI prostitute working in a bubble-dome in a city’s red-light district is programmed to be a virgin, over and over again, and a young teen boy, freshly beaten up for being gay, who’s forced to be with a prostitute to prove his masculinity.

THE GOLDEN HOUR, a story in Robot Uprisings. [Only available in print. Email to request.]

After a human boy is accidentally created in a robot factory, an unlikely group of robots decide to raise him as their own. THE JUNGLE BOOK but instead of animals, they’re robots.

DING DOGS AT THE MECHA EXPO, a story published in storysouth.

A 20-something talks her best friend into getting a security job at the Mecha Expo so she can make up for what her childhood lacked … a birthday-gift mecha with a big bow, one you can get inside of and control.

THE RECOLLECTION, a story in Conjunctions.

After an immigration war tore families apart, the enemy is tasked with reconnecting people to those they loved, through DNA collection. One young man – who has been through the trauma of detention, escape, and war — is trying to figure out how to trust the enemy with this huge task — or if it’s even possible.

A woman who was raised in an unbreakable model home – one designed to be earthquake resistant – tells her lover how her parents’ lives within this an unbreakable home have left her scarred.

ECDYSIS, a story at Tor.com.

A person who’s wildly imaginative and gender queer has run away from life by jumping from avatar to avatar. They’re now called back home – a family emergency. They claw and peel and strip away their avatars and head back home to confront the abusive father who could never accept them and the sister whom they loved and adored and abandoned in order to save themselves.

ORIENTATION, a story in Strange Horizons.

A woman comes out of full-body suspension to find herself on a group tour of her new home — a weird museum/spa/Japanese hotel – complete with brandy being cured to opera music and vespas and replicas of 1995 living room but with live pacing coyotes. But why she’s here and what’s going to become of them?

For real, a few years ago in Oklahoma, octagonal bullet-proof structures were installed in elementary-school classrooms – so the kids could get inside if there was a shooter. The news story shows the principal firing on the structure at a gun range to prove its safety. So, yeah. Baggott wrote a story about it from the kid’s perspective. This has a kid at the center of it but it’s not for kids. There’s a FARGO feel here.

When a do-gooder Girl Scout sees a crack that looks a little like a mouth in the street in front of her house, she makes a terrible mistake: She feeds it. The story is odd and a little comedic but this could really be horror. The concept is: Sentient Sinkholes.

HILLARY RODHAM CLINTON: A FAIRY TALE WITH COYOTES, a story in Quarterly West.

Back at home in Chappaqua, Hillary Clinton has lost the election, but in a fevered dream all she can remember are fragments of her speeches while haunted by the past. There’s a problem in Chappaqua – coyotes. In her fevered state, Hillary ventures out to confront the wild animals.

Read an excerpt from Julianna’s new book PURE. Go here, and click on The Opening Pages.

Click here to read Julianna’s essay in Real Simple about writing a love letter for a stranger on a plane.

Click here to read about the day that a zombie and a zombie-epidemic survivor showed up in Julianna’s workshop, published in the Boston Globe and International Herald Tribune.

Click here to listen to the follow up interview on NPR’s Tell Me More with Michel Martin.

Ta-Nehisi Coates, Senior Editor for The Atlantic, picked Julianna’s poem, “Mary Todd on her Deathbed”, which is published in Lizzie Borden in Love for the Culture page on TheAtlantic.com web site. He’s also chosen two other poems to feature — one entitled “Monica Lewinsky thinks of Bill Clinton While Standing Naked in Front of a Hotel Mirror” and the other “How It Begins” which appears in Julianna’s first collection, This Country of Mothers.

Two poems from Julianna’s first collection are now archived at The Virginia Quarterly Review. Click here for “My Mother’s National Geographics” or click here for “My Cousin Attempts Suicide at Gander Hill Prison.”

This is an extensive five-part interview of Baggott by Sebastian Matthews. It was conducted over the course of a few months and was published at Fiction Writers Review.

This is Julianna Baggott’s poem, “How It Begins” which appeared at poetry.com.

The National Endowment for the Arts conducted an interview with Baggott before her reading at the Folger Shakespeare Library. Here’s the podcast.

In 2012, Roxane Gay interviewed Baggott at The Rumpus.