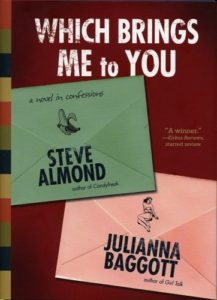 Critically acclaimed, bestselling author Julianna Baggott has published more than twenty books (Simon & Schuster, Random House, HarperCollins, Hachette…) under her own name as well as pen names, including two New York Times Notable Books of the Year and over one hundred foreign editions.

Her recent short story “Backwards” sold to Netflix with Shawn Levy attached to direct in a six-way bidding war. “Backwards” is a collaboration with her son, Finneas Scott, a Brooklyn-based writer. Her story “Welcome to Oxhead” is in development at Paramount TV with Jessica Biel attached. Her horror story “Rabbit, Rabbit, Rabbit” has landed at Paramount with Melanie Toast attached to adapt. Her novel Which Brings Me to You, co-written with Steve Almond, is with BCDF with a script adapted by Keith Bunin, Lucy Hale attached to star, and Peter Hutchings attached to direct.

Other works of hers are currently in development with Amblin, Disney+, Warner Brothers, and Lionsgate, to name a few.  Previously, her work has been optioned by Fox2000, Anonymous Content, and Nickelodeon/Paramount, among others. Table readings of her work have been performed by Kate Winslet, Bradley Cooper, Greta Gerwig, Bill Hader, Paul Dano and Adam Driver. Isabelle Huppert and Oliver Platt have voiced her work in audio.

She’s written for O. Magazine, NPR, Washington Post, and NYTimes Modern Love. She writes post-apocalyptic thrillers (The Pure Trilogy), romantic comedies (Which Brings Me to You), big world-building sci-fi (“Gaslighters”) and weird whimsy for kids (The Anybodies Trilogy). Her current focus is developing and writing high-concept short stories, anchoring intellectual property through publishing then pitching for film and tv.

Send inquiries for film and television rights for novels and/or stories directly to Julianna here  or by contacting her manager and producing partner, Brendan Deneen. Her literary agent is Nat Sobel at Sobel Weber Associates.