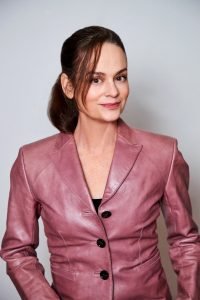 Note from the Author: Below is my bio. I’m not any one kind of writer. Reviewers have compared my work to everyone from John Irving to Nick Hornby to Pynchon, Vonnegut, and Borges to Suzanne Collins and Snicket to Manga, Alice in Wonderland, Eternal Sunshine of the Spotless Mind, and Mad Max…This might read as inconsistency. But I am deeply consistent: The details of the diorama matter to me. The box doesn’t. Put plainly: I see what I see – how I see it – and transcribe – whether that’s a poetic apocalypse or dark whimsy for kids or corrosively comedic suburban dissolution or historical footnotes or epidemics or artificial intelligence… If I had to choose a genre, I would pick this one: the diorama lights up, spins and whirs, and one wet eye clicks, locks onto your gaze, and is utterly real.

(We now return you to Julianna’s traditional bio)

Critically acclaimed, bestselling author Julianna Baggott has published more than twenty books under her own name as well as pen names Bridget Asher and N.E. Bode. Her recent novel, Harriet Wolf’s Seventh Book of Wonders, was a New York Times Notable Book of the Year (2015). Her novel Pure, the first of a trilogy, was also a New York Times Notable Book of the Year (2012) and won an ALA Alex Award. Her work has been optioned by Fox2000, Nickelodeon/Paramount, Warner Brothers and Anonymous Content and she currently has work in development at Netflix with Shawn Levy attached to direct; Paramount TV with Jessica Biel attached; a horror story at Paramount with Melanie Toast attached to adapt; the novel Which Brings Me To You (co-written with Steve Almond) with BCDF with Lucy Hale and Nat Wolff attached to star and Peter Hutchings attached to direct (in post-production); Disney+, Lionsgate, and MGM, to name a few. Many of her short stories in development will be included in her upcoming collection I’d Really Prefer Not to be Here with You & Other Stories (Blackstone, March 2023). She recently founded a production company called Mildred’s Moving Picture Show. For more on her film and TV work, click here.

There are over one hundred foreign editions of Julianna’s novels published or forthcoming overseas. Baggott’s work has appeared in The New York Times Book Review, The New York Times Modern Love column, The Washington Post, The Boston Globe, The International Herald Tribune, Glamour, Real Simple, Best Creative Nonfiction, Best American Poetry, and has been read on NPR’s Here and Now, Talk of the Nation, and All Things Considered. Her essays, stories, and poems are highly anthologized.

Baggott began publishing short stories when she was twenty-two and sold her first novel while still in her twenties. After receiving her M.F.A. from the University of North Carolina at Greensboro, she published her first novel, the national bestseller Girl Talk. It was quickly followed by The Boston Globe bestseller, The Miss America Family, and then The Boston Herald Book Club selection, The Madam, an historical novel based on the life of her grandmother. She co-wrote Which Brings Me to You with Steve Almond, A Best Book of 2006 (Kirkus Reviews); it has been optioned by Anonymous Content, and currently by BCDF, with a screenplay penned by playwright Keith Bunin.

Her Bridget Asher novels, published by Bantam Dell at Random House, include All of Us and Everything, listed in “Best New Books” in People magazine (2015), The Provence Cure for the Brokenhearted, The Pretend Wife, and My Husband’s Sweethearts.

Although the bulk of her work is for adults, she has published award-winning novels for younger readers under the pen name N.E. Bode as well as her own name. Her seven novels for younger readers include, most notably, The Anybodies trilogy, which was a People Magazine summer reading pick alongside David Sedaris and Bill Clinton, a Washington Post Book of the Week, a Girl’s Life Top Ten, a Booksense selection, and was in development at Nickelodeon/Paramount. Other titles include The Slippery Map, The Ever Breath, and the prequel to Mr. Magorium’s Wonder Emporium, a movie starring Dustin Hoffman, Natalie Portman, and Jason Bateman. For two years, Bode was a recurring personality on XM Sirius Radio. Julianna’s Boston Red Sox novel The Prince of Fenway Park (HarperCollins) was on the Sunshine State Young Readers Awards List and The Massachusetts Children’s Book Award for 2011-2012.

Baggott also has an acclaimed career as a poet, having published four collections of poetry – Instructions: Abject & Fuming, This Country of Mothers, Compulsions of Silkworms and Bees, and Lizzie Borden in Love. Her poems have appeared in some of the most venerable literary publications in the country, including Poetry, The American Poetry Review, and Best American Poetry (2001, 2011, and 2012).

She is an associate professor at Florida State University’s College of Motion Picture Arts where she teaches screenwriting. From 2014-2016, she held the William H.P. Jenks Chair in Contemporary American Letters at the College of the Holy Cross. In 2006, Baggott and her husband, David Scott, co-founded the nonprofit organization Kids in Need – Books in Deed which focuses on literacy and getting free books into the hands of underprivileged children in the state of Florida. David Scott is also her creative and business partner. They have four children. Her oldest daughter is the sculptor Phoebe Scott. Her son, Finneas Scott, is a Brooklyn-based writer who works with her on story development, most notably on “Backwards,” currently in development with Netflix.

Baggott is also the creator of Efficient Creativity: The Six-Week Audio Course. The first episode — AS IF by Magic — is available for free at SoundCloud.